Earls Barton United FC have had many visions since it started around 1895. Each have seen the club push forward in a positive manner by creating better opportunities, facilities and security. The meeting detailed the next chapter in our 123 year history.

The Vision for 2020 and celebrating our 125th year is to improve The Grange facilities, providing a new clubhouse/pavilion and changing facility with separate football and cricket pitches as well as additional junior, small sided football pitches. This is in the process of fruition as we stand now.

The Parish Council have bigger ambitions with 2 further phases on the Grange site, a social area as a 2nd phase and an auditorium indoor/sports hall as phase 3.

The Football club have the ambition of a 3G 9V9 pitch as part of phase 1 in lieu of the floodlit training area which it is in discussion with the Football foundation on. (The 3G has a number of obstacles to overcome however). 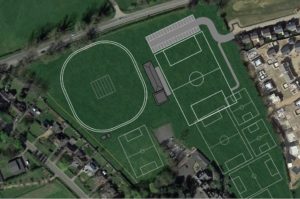 Drawings were displayed showing the original concept and how it had been developed leading towards the latest layout of the ground.

Plans of building layouts and a 3D view was also displayed for everyone to view.

Estimated costs were shown to encourage discussion on whether to adopt a safe low risk approach, or to push forward with a bigger changing facility.

The EGM was the first step towards the club being set up to meet these objectives;

The Pioneer site has struggled over the years with financial support from the principal financial bodies who can help. The Earls Barton Parish Council and Earls Barton United Football Club have worked together to ensure the financial stability of the ground and facilities. However this year saw for the first time since 1992 a willingness to increase the lease to a 10 year one as opposed to 5 year. This has triggered some support from the Football Foundation and other grant bodies to discuss raising support for better welfare provision.

The club has one more vision, something that we have lost as the social climate has changed but we are starting to see through the younger members. We want to have Earls Barton United FC loved as much as Premiership football and local teams like Northampton Town. We have sold over 180 hats and scarves in the last 2 weeks showing that people want to display their affection for the club. We have sold out on all our recent fundraising events. We now need the biggest buy in from all to ensure our vision become reality.

We need the offer of assistance, the dedication to be part of the club and the desire to say I can help, I will help and I want my club to grow stronger year on year.


All of the roles above will need to be filled in order to facilitate the vision of the club moving forward – some roles are currently filled and many are covered dually by one individual. We need your help – that help could be as simple as asking your coach “how can I help?”, putting cones away after training, maybe you can take the minutes at one of the meetings, make a poster, join a committee, become a parent rep for your team, help update the website – where ever you feel you could assist now is the time to step forward and give 10 minutes a month of your time to spread the load.

These are very, very exciting times during which we can build a substantial EBUFC legacy – we want and need individuals to want to be a part of that. Imagine being able to tell your children, grandchildren, family and friends as you enter the New Grange facilities – “I helped build that”