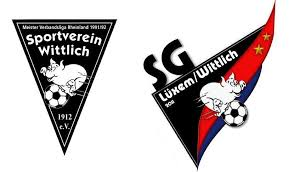 The annual Wittlich exchange is over for another year and what a time was had! 17 kids along with 12 coaches/committee/parents headed out from the Co-Op car park on Easter Sunday at 10pm to make the ferry at 5am to France before the last leg took us into Wittlich by mid-afternoon – waiting for us with cold drinks, a huge fresh buffet and smiles galore were our German hosts – players and families – at their temporary SV Lüxem Clubhouse home whilst their facilities are renovated and extended. Amongst a sea of Guten Tag’s and hello’s the players met with their host families and one by one disappeared of to their lodgings – not before they found footballs and a few goals though of course! Whilst some nerves were displayed, these were largely addressed naturally via the wonderfully welcoming families.

The adults thereafter settled into their hotel in central Wittlich and, once unpacked, met up that evening for Schnitzel and Schnapps with organiser Jorg and a number of our German friends from over the years at a nearby restaurant. Well fed (in some cases well lubricated!) it was to bed ready for Day One proper.

Meeting up with the players the next morning, we were all officially welcomed to the Town by the Mayor’s offices within the stunning Rathaus – the German word “Rat” means “council”, “Rathaus” is therefore the town hall. After a warm welcome, Antony prepared to speak on behalf of the team but his hesitation was enough for the players to take the lead as German and British players immediately took on the bottles of pop and sweets laid out for them! Official welcomes done, the adults chatted to the players who raved about some of the huge houses they were staying in – “there’s a hot tub!” – “My house would fit in his room!” – “they have a room dedicated to Xbox!” – “I’ve even met the neighbours” and so on. It was fair to say the boys were loving their surroundings! 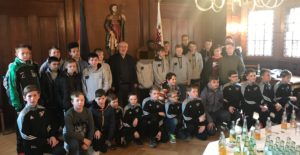 Lunchtime was spent exploring the town before we all met up again at The Eventum – a purpose built sunken sports hall/arena with glass upper walls that poured natural light in. This would be the first of our footballing endeavours as the players were split into 2 EBUFC and 4 Wittlich teams. Our hosts practice this form of football 3 times a week and it showed as they stunned us with their football – the EBUFC teams unable to win any of their games against our hosts – some of the football on show simply demanded to be applauded. So it was then that the mini tournament was split by an adult game featuring our coaches and a 6 a side game. With Sam Smart lost to injury in the warm up, the team of Antony, Cliff, Eugene, Kirk, Ryan and Shad took to the pitch in their England 66 shirts against a load of ringers – a mix of youth and 3 ex Bundesliga players – with no subs! 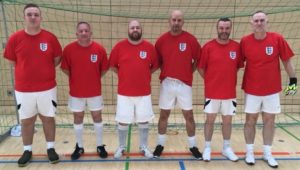 Quickly 3-0 down, EBUFC rallied in the 2nd half and a Cliff hat trick rescued a draw – for EBUFC to go on and win on penalties!!! After the game a special award to our hosts by Geoff – a fabulous picture of Roland and Ann and a reminder of why it is important to keep this exchange going. We also took in the presentation of the huge “Anne and Roland Cup” (actually bigger than some of the players) to the winning youth team from Wittlich on the day as well as commemorative medals for all players. 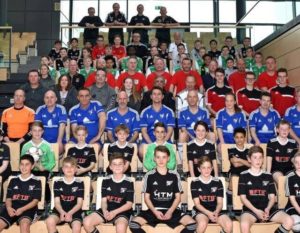 Onto Wednesday and a trip for the adults to Bernkastel-Kues, a picturesque town at the base of an amazing castle. The players spent the day with their host families, taking in go-karting, swimming and of course more football! Later the adults were taken to the amazing Zylinderhaus Museum and Restaurant – where a personalised tour of cars and life was provided by the larger than life owner Bernd Benninghoven who regaled us with tales that only a millionaire playboy can! 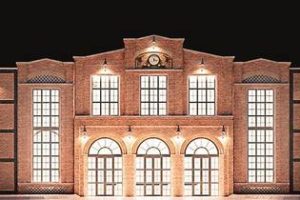 By the time the adults reached the sports bar to watch the champions league match that night they were spent after a day full of laughter. Word reached that the players were shattered after a very full day capped off by a meet up at a pizza parlour that served the biggest slices they’d seen. Full hearts and bellies that night!

Thursday arrived with the same warm and sunny weather we had seen all week and a trip to the fantastic Eifel-Park in nearby Gondorf – a theme park and zoo all in one. This turned out to be one of the favourite days for the players as, along with their German counterparts, they took on the rollercoasters, luge, water rides, bumper cars and slides – and as the park was largely ours alone there was no queuing and plenty to do! A really great day and it has to be said that it was days like this that really highlighted the exemplary behaviour of the EB lads who did the village and the club proud. It really was a fantastic day and the players – as well as the adults – had a brilliant time. The evening was completed for the adults with Wine tasting at the fabulous ‘Losen-Bockstanz’ winery – who have been producing some of the finest Rieslings in Germany since the 16th century. Our host for the evening, owner Thomas Losen, was knowledgeable and keen to highlight his array of amazing wines – he was also pleasantly surprised when tasting the special guest wine – a few bottles of an Earls Barton White from our own New Lodge wines!

Friday duly arrived – the big football day. Whilst the morning was given over to souvenir and gift shopping, the afternoon arrived with fantastic weather and two games, between the Under 13’s in match one, and the Under 12’s in match two – the two providing an aggregate score to determine the overall winner of the Jugend (youth) Cup. The two games were much closer than the indoor five aside football we had experienced earlier in the week – with both ending 4-2 to our hosts, thus securing an 8-4 victory for Wittlich. However the adults again did us proud with a dominating win in the penalty shootout to retain the spot kick trophy once more! A game of walking football provided many point and laugh moments to finish the football before the end of tour presentations got underway – Jorg presenting the club with a huge photo of everyone taken earlier in the week at the Eventum to hang at The Grange as well as bottles of the clubs own wine for all of the adults – in turn we presented a very special commemorative football. Our hosts then rolled out a huge hot and cold buffet of traditional German dishes, meats and salads as night fell. Before we knew it, the players dispersed for their final night with their hosts and the adults headed back to the hotel after what had been a fantastic day and night.

By Saturday morning it was home time and we all met one last time as we boarded the coach ready to go home – hugs galore abounded, contact details were shared and tears were shed as we bid Auf Wedersen to our fantastic hosts before the return journey started. What an amazing trip it was, with too many stand out moments to list. Instead, lets share some of the comments the players themselves offered on the journey back:

“The theme park was actual jokes”

“The rollercoaster at Eiffel was mad!”

“My host is now my mate”

“Can we come back next year?”

“I actually hurt from laughing”

“I’m asking to move to Germany”

Next year it’s our turn to host and we are all looking forward to meeting up once again in the spirit of football and friendship.

On behalf of the club, once again thank you to Earls Barton Steam Rally and Wellingborough Council twinning department for their generous sponsorship and helping make the trip possible.